Bryce Canyon National Park is named for just one of many canyons which form a series of horseshoe-shaped amphitheaters on the edge of the Paunsaugunt Plateau in southern Utah. Erosion has carved colorful Claron limestone into thousands of spires, fins, arches and mazes. Collectively called "Hoodoos," these unique formations are whimsically arranged and tinted with colors too numerous and subtle to name.

Early Native Americans left little to tell us of their use of the plateaus. We know that people have been in the Colorado Plateau region for about 12,000 years, but only random fragments of worked stone tell of their presence near Bryce Canyon. Artifacts tell a more detailed story of use at lower elevations beyond the park's boundary. Both Anasazi and Fremont influences are found near the park. The people of each culture left bits of a puzzle to be pieced together by present and future archaeologists.

Paiutes lived in the region when Euro-Americans arrived in southern Utah. Paiutes explained the colorful hoodoos as "Legend People" who were turned into rock of various configurations by Coyote. The spell bound creatures still huddle together here with faces painted just as they were before being turned to stone.
© Scenic Vista Photography 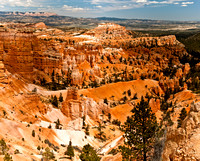