Last November my lovely travel companion and I set off in our RV on a three week road trip to explore the eastern Sierras and then cross the Inyo Mountains into Death Valley, a place that has been on my photography bucket list for a long time. Buried deep within Death Valley's backcountry lies The Racetrack, a magical and mysterious place where huge rocks seemingly transport themselves across the flat terrain. Surely the furrowed meandering trails sweeping across the hard mosaic pattern of interlocking polygons on this ancient, dried-up lakebed, that I had read about and witnessed in pictures would provide evidence of this geological phenomenon, even if the rocks had vanished.  I was anxious to travel there and experience this spectacle for myself, reasoning that maybe I could solve the mystery of the moving rocks, if only I could view them firsthand.

The Racetrack Playa, as it is commonly referred to, is located in the western region of Death Valley, not far from Panamint Springs or Stovepipe Wells as the crow flies. Disappointingly, due to summer thunderstorms, many of the roads into the backcountry had been washed out, preventing access to numerous areas of the park my companion and I hoped to explore.  Luckily the area where The Racetrack is located was accessible, though we would soon learn, not easily. We planned to drive fifty miles north on the paved road out of Stovepipe Wells, and then head south twenty-six miles on the unimproved road from Ubehebe Crater, so as to arrive at The Racetrack by late afternoon, then spend the night in our sleeping bags in the back of our Sequoia at the Homestake Dry Campground, another three miles past The Racetrack's southern end. The idea was to shoot a set of photos at sunset and then rise early the next morning to take in the sunrise. Little did I realize that our little road trip to this desolate place would be an adventure in itself.

The Racetrack is located high in a remote valley between the Cottonwood Mountains and the Last Chance Range. We began the arduous drive where the pavement ends at Ubehebe Crater, and onto the mother of all washboard roads. After more than three hours of painfully slow driving we were able to negotiate the twenty-six miles of washed out and severely rutted dirt road as it snaked through the desert landscape filled with eerily twisted Joshua Trees, in our high clearance four-wheel drive Sequoia.

Ubehebe Crater is an enormous hole in the ground, a half-mile wide at the rim and over 600 feet deep. Commonly thought to be a meteor crater, it was actually formed by volcanic steam and gas explosions some 3,000 years ago. 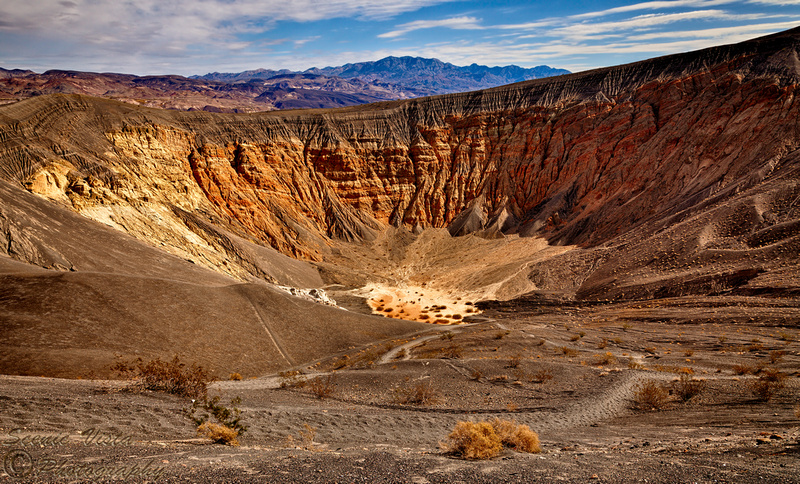 Some nineteen miles after passing Ubehebe Crater, we came to a fork in the road marked as Tea Kettle Junction. This is where one can hang up that old worn out teapot that you just happened to bring along for the occasion.

Another six miles and we could finally make out The Grandstand rock formation, a very prominent landmark over seventy feet high, jutting out of the playa and marking the northern end of The Racetrack, a dry lakebed commonly referred to as a playa. Playas are some of the smoothest and flattest landforms anywhere on earth. The Racetrack Playa lies 3,608 feet above sea level, and is three miles long by one and a half miles wide, covering almost three square miles of the valley floor. It is exceptionally flat, as the northern and southern extremes of the playa differ in height by a mere one and a half inches. 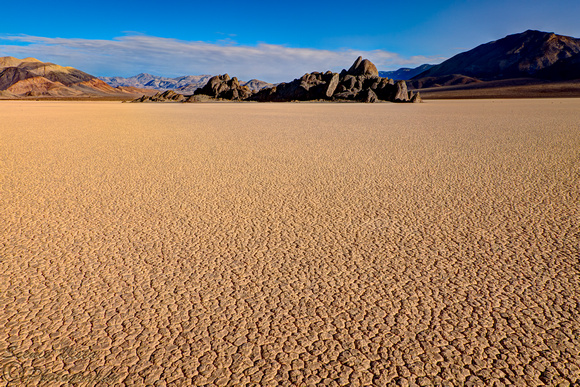 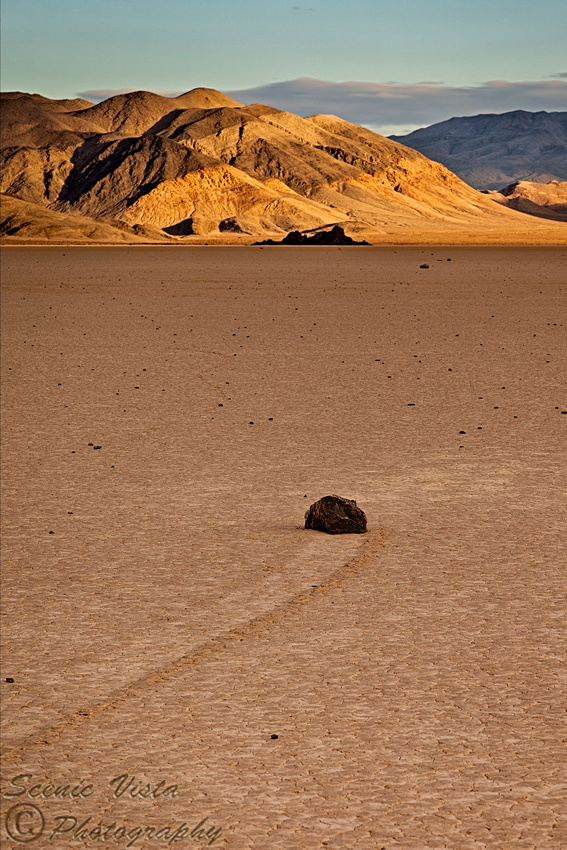 Continuing for another three miles on that vexing washboard road to the southern end of the playa, we finally reached our destination, the origin of the moving rocks. We parked alongside the road and hiked across the dry lakebed, where we began to see more and more rocks with their deeply furrowed trails scarring the landscape. Our excitement increased with each step as it became clear to us just how many rocks were scattered about on the playa, waiting patiently in place to be discovered.

The southern end of The Racetrack Playa abuts a steep 850 foot mountain face composed of blue-grey colored dolomite rock. The stones on the slopes, loosened by wind and water erosion, supply the playa with most of its rocks. 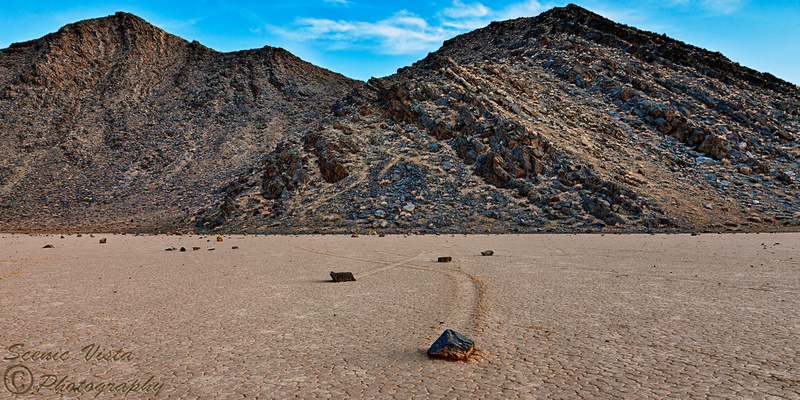 So how do these rocks move? Scientists and researchers aren't exactly sure how the rocks, which can weigh many hundreds of pounds, make their way across the dry lakebed. Some of the rocks that have moved weigh less than a pound, but many others are in the 25 to 30 pound range, as evidenced in the accompanying photographs, and some rocks simply defy all reason. One of the largest rocks, named Karen, an estimated 700-pound block, rested on an old, straight 570-foot-long track and didn't budge during a seven-year study by the scientists. Then one day, Karen was gone. A powerful force is required to move rocks that big, and the obvious candidate was the fierce playa wind. During periods of heavy rain, water run-off from the surrounding mountains collects on the playa forming a shallow lake. When the water evaporates, a slick film of slippery mud is left for a brief period of time. It is thought that during high wind events, usually in winter, the mountain ranges on each side channel and funnel the wind through and across the playa pushing the rocks on their spectacular journeys. No one has ever witnessed or recorded the rocks actually moving which adds to the mystery. 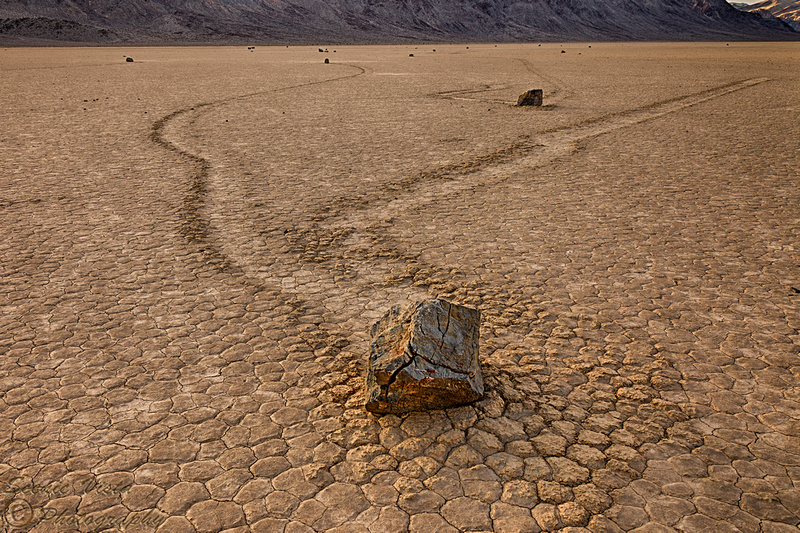 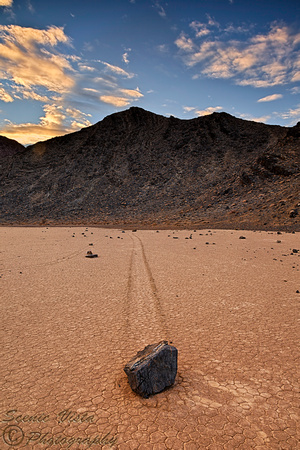 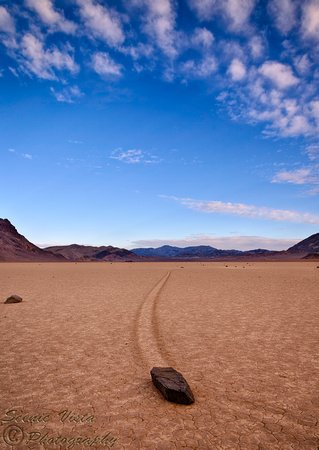 Some rocks leave tracks that can be straight as an arrow and many hundreds of feet in length. Others may zigzag crazily back and forth sometimes forming perfect right angles that defy all reason, while a few may form a symmetrical circular path. 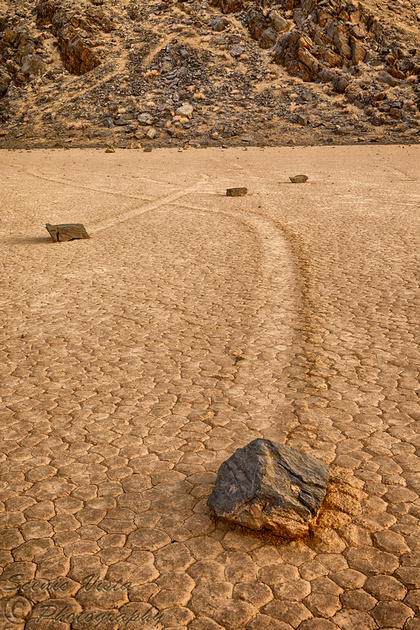 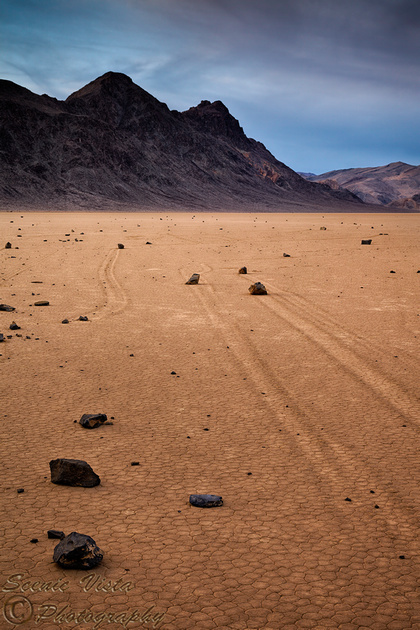 No one would even know that the rocks move at all if it weren't for the telling trails left behind. 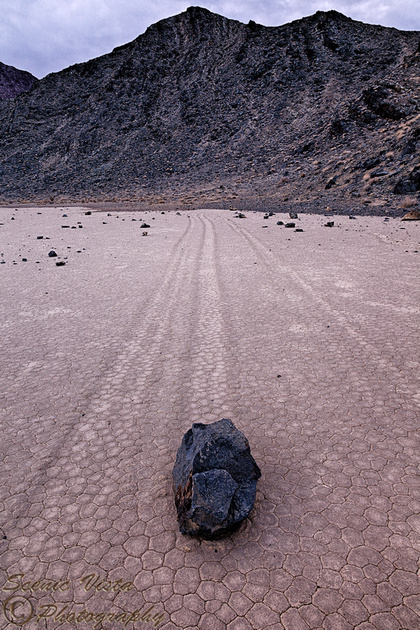 The furrowed tracks made by the rocks are indelibly etched in the hard surface of the playa until the next storm passes over Death Valley, which are few and far between, and provides enough moisture to soften the ground and wash away the evidence. 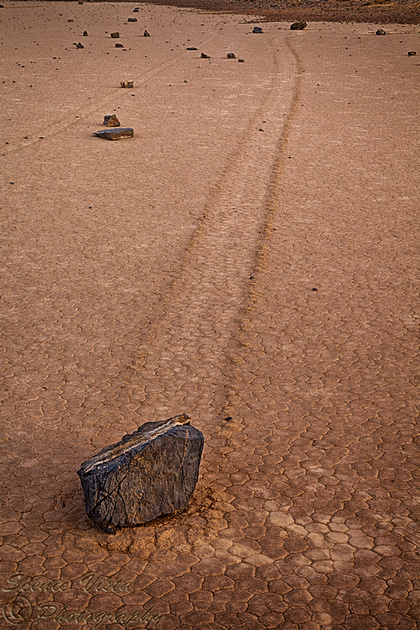 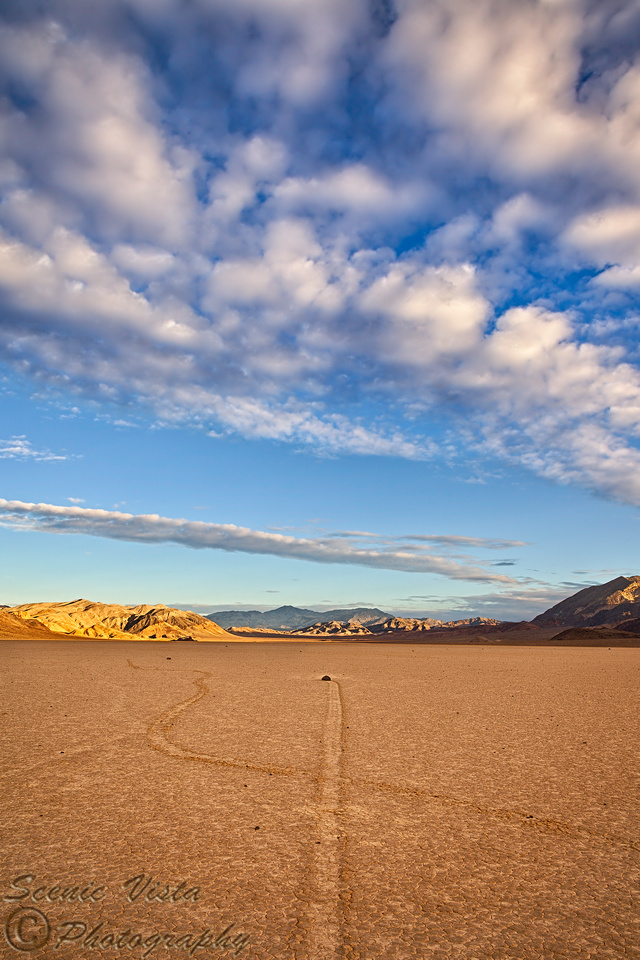 Surely the mystery and debate will go on as long as enough rocks remain to be seen by others just as intrigued as myself. Unfortunately in recent years, the rocks have been disappearing at an alarming rate, leaving nothing behind but a flat and remarkably beautiful desert playa devoid of stones. It seems as though some people have no regard for the natural wonders of our National Parks and feel that these mystifying rocks, with their supernatural powers, can be had for the taking.

This is an update to my original Blog entry back in August 2014. You can see for yourself in a first ever video filmed in December 2013, by paleobiologist Richard Norris of the Scripps Institute of Oceanography, describing the phenomenon of the sliding rocks in Death Valley's Racetrack. As Richard Norris said, "Science sometimes has an element of luck." "Being there at the right time is everything in photography," I would say. https://www.youtube.com/watch?v=uyHcs7B27Zk

The full story makes for some very interesting reading: https://scripps.ucsd.edu/news/mystery-solved-sailing-stones-death-valley-seen-action-first-time