Just five miles north of Moab, Utah is Arches National Park, which contains the world's largest concentration of natural sandstone arches. More than 2,000 arches are located within the park's 76,518 acres.

Water and ice, extreme temperatures, and underground salt movement are responsible for the sculptured rock scenery of Arches National Park. Thousands of feet thick in places, a salt bed was deposited across the Colorado Plateau 300 million years ago when a sea covered the region and eventually evaporated.

Devils Garden Campground is located 18 miles from the park entrance in the middle of Arches National Park at an elevation of 5,200 feet. Surrounded by magnificent sandstone rock formations and natural arches, the campground exemplifies the national park theme.

Delicate Arch is a 52 foot tall freestanding natural arch. It is the most widely recognized landmark in Arches National Park and is depicted on Utah license plates and on a postage stamp commemorating Utah's centennial anniversary of statehood in 1996. The Olympic torch relay for the 2002 Winter Olympics passed through the arch. Because of its distinctive shape, the arch was known as "the Chaps" and "the Schoolmarm's Bloomers" by local cowboys.

Delicate Arch is a moderately strenuous three mile round trip hike to an isolated remnant of a bygone sandstone fin, perched on the brink of a canyon, with the dramatic La Sal Mountains as a backdrop.

Landscape Arch is the longest natural rock span in the world spanning 306 feet. In 1991, a massive slab of rock fell from its underside, resulting in the thin ribbon of rock you see today.
© Scenic Vista Photography 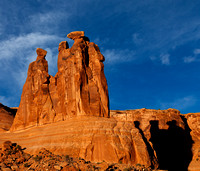 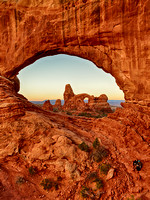