Lake Powell is a reservoir formed by the Glen Canyon Dam on the Colorado River, straddling the border between Utah and Arizona. The reservoir is named for explorer John Wesley Powell, a one-armed Civil War veteran who first led an expedition of the Colorado River in three wooden boats in 1869. At full pool (3,700' elevation) Lake Powell is one of the largest man-made lakes in North America at 186 miles long, having 1960 miles of shoreline, with over 96 major side canyons. You could spend years exploring the numerous canyons and rivers of Lake Powell and still not see it all.

Rainbow Bridge is one of the world's largest known natural bridges at 275 feet across and 290 feet high. Rainbow Bridge is sacred to at least five Native American Tribes.
© Scenic Vista Photography

CATHEDRAL IN THE DESERT 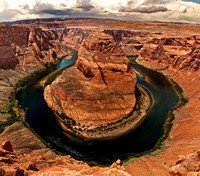