Grand Teton National Park consists of approximately 310,000 acres and includes the major peaks of the 40 mile long Teton Range as well as most of the northern sections of the valley known as Jackson Hole. The park is named for Grand Teton which is the tallest mountain in the Teton Range. At 13,775 feet, Grand Teton rises abruptly more than 7,000 feet above the Jackson Hole valley. The Teton Range is the youngest mountain range in the Rocky Mountains, and began forming between 6 to 9 million years ago.

Organized U.S. Government explorations to the region commenced in the 1870s as an offshoot of exploration in Yellowstone. Though the Teton Range was never permanently inhabited, pioneers began settling the Jackson Hole valley to the east in 1884. These earliest homesteaders were mostly single men who endured long winters, short growing seasons and rocky soils which were hard to cultivate. The region was mostly suited for the cultivation of hay and cattle ranching. By 1890, Jackson Hole only had an estimated permanent population of 60. 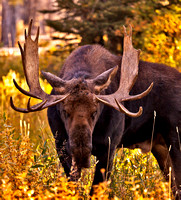