Thirty-five miles west of Moab is Canyonlands National Park, the largest national park in the state of Utah. It is divided into three districts by the Green and Colorado Rivers: the Island in the Sky, the Needles and the Maze. Named for their most prominent geologic characteristics, these districts are quite varied in what they have to offer.

The Island in the Sky section of the park sits atop a massive 1,500 foot mesa. Twenty miles of paved roads lead to many of the most spectacular views in southeastern Utah. From these lofty viewpoints it is possible to see nearly 100 miles in any given direction, resulting in panoramic views that encompass thousands of square miles of canyon country.

Three mountain ranges break the pattern of the flat-topped landscape. To the east rise the La Sals; to the south, the Abajos; to the southwest, the Henrys.

The Maze District is Canyonlands at its wildest, ranking as one of the most remote areas in the United States. To the northwest, the Horseshoe Canyon Unit contains what is probably the finest display of prehistoric Indian rock art in the United States. The famous Great Gallery, largest of several Horseshoe Canyon sites, is 200 feet long and 15 feet high, and contains dozens of intricate human and animal figures mostly in red, with some brown and white. The pigments were made from finely ground minerals, and then mixed with a liquid base, perhaps animal tallow or vegetable juices, to form a crude paint.

This Barrier Canyon style of rock art has been called the Louvre of the Southwest, and, indeed, it is a phenomenal relic of the past. The paintings are at least 2,000 years old, and possibly as old as 8,000 years. Rock art is notoriously difficult to date accurately, but from the style it can be reasonably certain that the work was done by the so called Archaic people who lived in the area before the arrival of the Anasazi and Fremont Indian cultures. Archaic clay figurines that closely mimic the pictographs have been found about nine miles away in Spur Fork, a tributary of Horseshoe Canyon, and the figurines have been dated to about 4700 B.C.
© Scenic Vista Photography 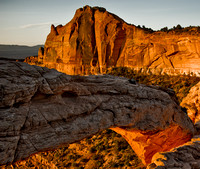